While off in Beirut, I had the great chance on saturday to take part to the live 24/24 hours comics marathon Grand Papier.  I was in Hatem’s cosy flat in Hamra, West Beirut. Hatem is one of the artists who have founded Samandal, the Lebanese comics magazine (online and hardcopy) that is released under Creative Commons license.

This was the great atmosphere I’ve found over there: 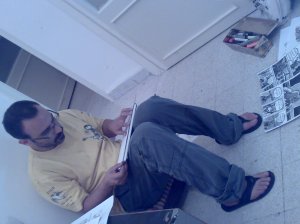 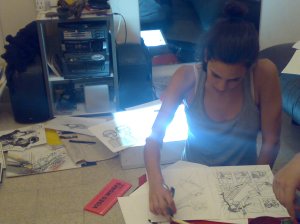 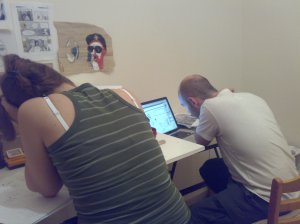 The marathon featured online contributions from different cities in the world, like Beirut, Brussels, Paris, Montreal, even Papetee. Everybody was connected thru a webcam 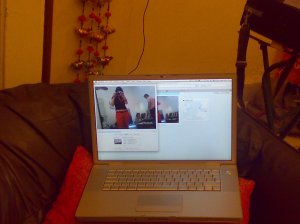 Everybody was invited to write his/her own story starting from a common picture posted online, and everybody worked out something according to his/her style and fantasy. 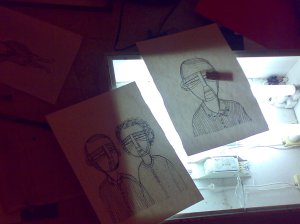 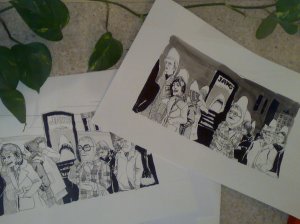 Samandal‘s folks are not new to these extravangances. They are the first ones who organised a remix party, encouraging the invited artists to play with their works released under Creative Commons, doing cut up and re-publishing the stuff.

The comics feature different Arab artists, who write stories both in Arabic and French or English. Great strips can be found from countries that you would never have imagined, like the Dubai hyppie series, coming from UAE and describing in an hilarious way the daily life of a young Emirati; or like the manga strips, Japanese way, perfectly re-designed by young veiled ladies living in Lebanese refugee camps.

Samandal can be found on the Internet and it is also distributed in a very cool hardcopy edition available all over the places in Beirut (including the airport) and some other Arab countries. The team is very open to submissions coming from all across the Arab world. Next deadline is on 31st may.

Thanks to the Samandal‘s folks for having invited me to the marathon and for doing such a cool thing under CC. 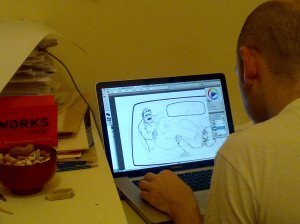 It seems that finally the barcamp trend is spreading out very quickly in the Arab world. Tomorrow two different barcamps will be held in parallel, the Tunisian one and the UAE one I’ve already posted about. I hope the Tunisian and the UAE folks will result in some interesting interaction tomorrow!

The public discussion of the first Arabic Creative Commons (CC) 3.0 license draft started yesterday. Jordan will be the first Arab country to discuss version 3.0 which is a major step in the diffusion of the CC philosophy across all the Arab world. Creative Commons is an international non profit organization founded in 2001 by Larry Lessig professor of Law in Stanford and author of many important books about the sharing of creativity on the Internet. CC provides free tools that let authors, scientists, artists, and educators easily mark their creative work with the freedoms they want it to carry.

It’s a major shift from the copyright “All Rights Reserved” philosophy to the more flexible “Some Rights Reserved”. This shift is not simply concerning the juridical sphere of legal rights. It goes towards the empowerment of users and creators, educators and artists, individuals and communities of individuals that want to share and learn one from each other in a legal way.

The copyright as a method to protect information goods (video, books, music, etc) was born in a “analogue environment” marked by scarcity of production and difficulty in the distribution process. These material obstacles have been clearly removed in the “digital environment” which is on the contrary marked by the abundance of information goods and by a very easy process both in production and in distribution. But the legal obstacle of “all rights reserved” remains within this changed framework preventing many new subjects to use this huge amounts of information goods to learn, create by themselves and share with the others.

In this perspective, the battle for knowledge sharing is key in the Arab world as it is in Europe and in the US.

Copyright might seem not a big issue in the Arab world, where piracy is widespread and openly tolerated (and many more urgent problems have still to be solved). But, indeed, Arab media is booming thanks to Gulf investments and cash: the Gulf itself is setting the trends and standards for the future of the media all across the Arab region.

Having a closer look to what is currently happening in that part of the Arab world,  we will see that restrictions and persecutions on piracy issues have started, both in Saudi Arabia and in the UAE.

Copyright law is going to be enforced also in the Gulf, and this trend will go soon towards the Arab Mediterranean region.

So it is very key to start a debate on those issues right now. This is not a “technical” discussion happening among lawyers or geeks communities. It is very key for all the communities of individuals, particularly those who believe that the future of humankind lies in the sharing of knowledge and experiences. And the sharing of knowledge and creative works is the only antidote that we have against the alleged “clash of civilization”.

Mabrouk to Ziad Maraqa of Agip organisation, CC Jordan lead, and to all the others in the Arab team, for this first great achievement. Everybody in the Arab world is invited to join the discussion and to contribute to the debate at:

Two days ago the news about Kuwaiti Ministry of Communications blocking You Tube for carrying offensive content provoked a certain turmoil on the Arab media. Issues were raised as those of censorship, freedom of expression, etc. Blogger communities had felt of course very attacked.

The origin of all this “ado” is believed to be some videos posted on You Tube, one of them featuring a man signing verses from the Quran while playing oud (a traditional Arab music instrument) and another showing caricatures of the Prophet.

The content was judged offensive, expecially during the holy month of Ramadan (in traditional Gulf countries having music played together with holy Quran could be interpreted as offensive to religion).

But, according to Global voices and other sources like Itp.net, the ban should be lifted soon as the Ministry of Communications decided yesterday to revoke the decision.

“To ban or not to ban”, this is the question.

But at a deeper look it could be a “much ado for nothing” issue, as Gulf countries are used to be supportive of media revolution while banning it at the same time.

It happened with Saudi Arabia at the beginning of the satellite era when, while banning dishes at home, the country was financing the boom of satellite networks abroad, opening Arabic tv stations in European countries like Italy and UK.  Movie theatres are still banned throught the country, while Saudi capitals are heavily financing the still developing but promising movie industry all across the Arab region. And, now that Wall Street and hedge funds are facing the economic crisis, US companies are making deals to produce English language movies in the Gulf with local funds plenty of pocket money not to be found in Western countries.

UAE, Bahrain and Kuwait itself are at the forefront of the Internet revolution in the Middle East. They are financing big projects -like the Internet City in the Dubai area-, inviting web investors, sponsoring high level conferences on telco and IT issues, opening first class training courses for enterpreneurs and trying to support innovation and digital creativity.

At the same time, Skype is banned in the UAE as it is in Kuwait (even if people largely use those services), probably just for telcos monopoly reasons, not for the censorship or freedom of expression argument.  Liberal Dubai also does censor contents on the popular photo sharing web platform Flickr.

Is it possible to support innovation and digital revolution while at the same time putting limits and conditions to it? Is this the new model that will take place in the rich Gulf states that now control many key sectors of world economy? A “walled garden” innovation, under certain conditions and constraints?

Or is it simply the “Arab way” to do things? Which is: a “much ado about nothing” strategy.

The Saudi Arabian grand mufti in July released a fatwa on Turkish soap operas, followed by millions of Arabs, just because they are considered to be immoral and “evil”.  It happens that those soaps operas are distributed on MBC screens, a very influencial tv network based in Dubai but backed by Saudi Sheikh Walid Al Ibrahim‘s capitals. The Sheikh is a relative to the ruling family, so everything happening seems to be an “internal discourse” among the country different establishments.

On the one hand there is a push to change and invest in the new; on the other hand, a pressure to block it which is coming from the same – or very much related- internal powers. Is it a real struggle happening among different powers going in opposite directions, or is it just the way things progress in the Middle East? By being banned formally to “keep the facade” while in reality everybody is doing the contrary and being tolerated?